LAST WeeeeK, a phrase I have sung since I finished playing football. Anyone that has been through the bumps and bruises of a college seasons knows the tune and the happiness that comes over you when you reach the last week of the season (enough said). This is the last week in CA "Ret-ta-Go" I think/ know I will recover better in TX as I will be on more familiar turf. Gotta run and get ready to pick up the wife at the airport so we can close out this last week and get back to TX.
Posted by Jerrold at Saturday, April 28, 2007 1 comment:

Time is quickly winding down for me in CA. Can't wait to get back to more familiar territory; not that CA hasn't treated me very well (along with saving my life) but I have to spread my wings and leave the safe confines of the Stanford Medical nest. Life goes on and I need some BBQ and Texas sports radio. May 6 looks like the day I will be touching down in Texas to bring closure to the journey I will be finishing.
Posted by Jerrold at Wednesday, April 25, 2007 2 comments:

Signs that I have been here far too long....

I think I have been here far too long, I can't take the Fif anymore some of my observations....

The Stars at night shine big and bright (clap clap clap) deep in the heart of Texas ......

Virus on the loose

It seems that a few of the heart and lung transplant patients that were transplanted around the same time as my procedure are catching RSV an airborne virus that is basically not good for people/patients in our compromised, weakened health conditions. I am really living like a hermit right now restricting my access to the other people in the apartment complex, and not even speaking with the sick ones on the telephone or e-mail either for that matter :-) e-mail gets viruses too. If I get this virus then it would be a 4/5 day vacation for me at the hospital in an isolated room get heavy antibiotic IV drips; all this helps to keep your system from going into rejection of the transplanted organ.
Posted by Jerrold at Wednesday, April 18, 2007 No comments:

Saw the old lungs today and it was an unemotional event of my behalf. I saw how bad the old lungs were and am even more grateful for the gift, the second chance I have.


Some pictures of the old lungs are below keep in mind they are already segmented and research has begun on them. The lungs were undersized and honestly speaking with the doctors they don't see how I could even breath. The holes or nodules you see in the pictures are the cancer nodules for the BAC. 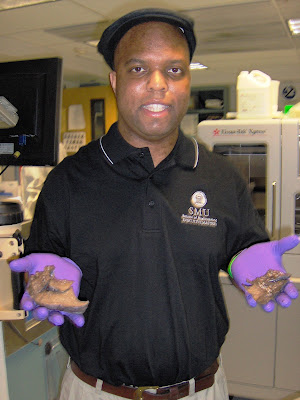 Someone please fix my hat my hands are compromised I am a doctor now; or at least for the moment I am :-) 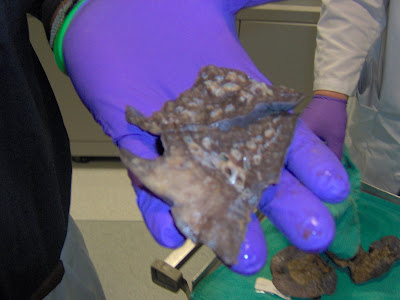 Bad lung segment, notice the cancer nodules that starved me for oxygen I was slowly and daily suffocating, which would have been a painful death (mentally and physically) 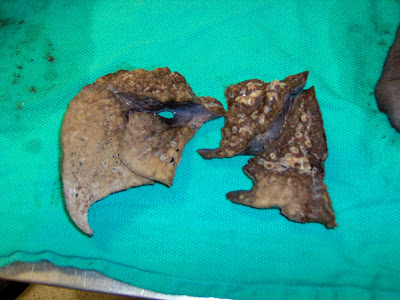 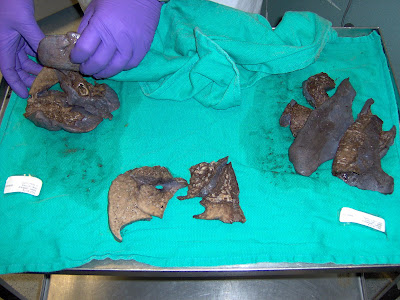 My wife and I will stop in and visit Ralph right lung and Larry left lung one more time before the research gods have their way totally with them.

Today I will be visiting my old lungs to have a heart to heart with them. Check that I will be having a lung to lung (ha ha laughing w/out coughing) with them. I hope to have another session with them in a week or so when my wife is here to escort me back to TX.

I will look at the lungs, probably hold them but just try to figure out where we went wrong and why they (I) got sick, they used to be so strong but suddenly became so weak, without a proper diagnosis for years and finally no valid justification as to why or how I got BAC lung cancer; go figure some things will never be known; I am at peace with that lack of knowledge. MOVING Forward....
Posted by Jerrold at Monday, April 16, 2007 No comments:

Smooth sailing this week with all the doc visits. Planing to return to TX first week of May ready for some BBQ and normalcy.
Posted by Jerrold at Friday, April 13, 2007 No comments:

Still recovering according to schedule (possibly ahead of schedule) which is good so maybe I can get back to TX sooner rather than later. Bronchoscopy at 1400 PST on Tuesday so I am up eating until 0200 PST since I must fast 12 hours before the procedure that lets the docs look at my lungs. More food..........
Posted by Jerrold at Monday, April 09, 2007 No comments:

Broke a little sweat on yesterday

Broke a sweat at PT (physical therapy) on Tuesday but not much, the stationary bike made me drip a little (heavy stress on very little). The whole PT process was alot easier than I expected, I have been through worse PT when I was playing competitive sports. More PT today so maybe they will challenge me today :-) or I can just make up my own workout.
Posted by Jerrold at Wednesday, April 04, 2007 1 comment:

Jerrold Dash, pictured in his apartment near Stanford Medical Center on Sunday, is breathing easier these days, having received a double lung transplant at Stanford in early March. Dash had been diagnosed with lung cancer in February 2006. On the table in front of him is an apparatus that helps him measure his progress as his lungs grow stronger.
Dash gets second wind

At first Dash ignored it. But a stolen glance confirmed it was a local number. His heart was in his throat as he asked to borrow a phone.

Since being diagnosed last February with Stage IV bronchioloalveolar carcinoma, a type of lung cancer that affects nonsmokers, the Lockheed Martin Aeronautics systems engineer had been hoping for that kind of good news.

"It was a little surreal," he said. "You prepare yourself mentally for it. But I still got a little shaky."

A day later, the diseased organs were gone and Dash was breathing more easily than he had in months. Now free of cancer and on the road to recovery, he hopes to return to Fort Worth by June, rejoining his wife, Rhonda, and their two daughters, 3-year-old Raegan and 1-year-old Ravyn.

"I couldn't believe it," said Rhonda, recalling the day Dash called her with the news. "I started jumping up and down, crying. One of my daughters knew I was talking to daddy and she asked me what was wrong with him. I said, 'Nothing. These are happy tears.'"

Although he's beaten cancer, Dash isn't pushing it out of his life. He wants to erase the stigma surrounding lung disease which, as he discovered, doesn't always affect cigarette smokers.

Dash's oncologist at Stanford, Heather Wakelee, appreciates his outlook. "Lung cancer is not just a disease of people who smoke," she said, noting that roughly 9 to 10 percent of men and 20 percent of women who develop lung cancer never smoked.

Dash also wants to be an inspiration to other late-stage bronchioloalveolar carcinoma sufferers. Transplanting lungs into such a patient is regarded by some in the medical field as a controversial procedure because "the odds of the cancer coming back are higher than not ... and Jerrold is aware of that," Wakelee said.

But for someone as young and fit as Dash, the procedure made sense. Before the operation, he was one of two patients with the cancer awaiting a transplant, according to the United Network for Organ Sharing's Web site.

"I don't want others to give up. I want them to take a risk," he said. "If you have a terminal illness, fight it. Don't accept the status quo treatment."

As strong as he sounds today, Dash acknowledged that he needed help getting through the ordeal. Prayer and the kindness of others gave him - and his family - the strength to hold on, he said.

Sue Passailaigue, for one, provided a place for him to stay in Mountain View while he waited for the call. She offers the condominium to patients such as Dash who need to be close to the hospital in case an organ becomes available. Donations of cash, time and household items help keep it open.

"Sue calls it the compassion condo," Dash said. "If the walls could talk, the stories they would tell."

Dash is now living in an apartment a stone's throw from Stanford University Medical Center and taking his recovery one day at a time. Physical therapy begins soon, but the former Winston-Salem State University fullback is already walking and doing flights of stairs.

In short, he has traded one focus, beating cancer, for another: getting healthy enough to resume the life he was forced to put on hold.

ON THE WEB Read about Jerrold Dash's battle against cancer on his blog at 2newlungs.blogspot.com.

The weekend was tame. We just ran errands for items for the apartment so it was good to get out despite the fact I still get a little ticked off at the glares (comatose gazes) I get when I am wearing my respirator breathing mask. I think to break-up the gazes I will make up some appropriate flash cards that will diffuse the situation :-).

Watched a movie on Saturday: Wild Hogs and it was pretty funny. It reminded me of the time I tried to teach some of my buds to ride an old motorcycle that I had when I was working in Rhode Island years ago.

On Sunday I shattered the two mile mark with ease, and finished off the walk with several sets of stadium stairs. I also began lifting weights today; nothing serious just fitness/resistance tubes working my legs ONLY.

Wrapped up another news article for the Palo Alto Daily News.
http://www.paloaltodailynews.com/article/2007-4-2-pa-dash-lungs
Posted by Jerrold at Monday, April 02, 2007 1 comment: