How disappointing is it to be a sports fan in the Bay Area. I was settled in to see if the Dallas Cowboys could pull out a victory in the final minutes of the game and the network cuts out to Heidi (49ers vs. Broncos). Who cares about that game or can’t you pick it up after the first game ends since it was reaching its climax. When it is all said and done the result of the 49ers versus Broncos game will be a loss for both team; in other words it will end in a tie nothing nothing. Oh well back to cnnsi so I can keep up with the Cowboys (win or lose). Cowboys lose; they stunk up the field as a team; although there were some individuals that played well it is a team sport and team loss.


The preliminary result of last weeks CT scan is that there is no change, I am Stable for now.
Posted by Jerrold at Sunday, December 31, 2006 1 comment:

Got my latest CT scans today so I just have to wait and see which S word (Shrinking, Spreading, or Stable) the docs give me after they review the films. Just like most CT's that I have had this one did have it's fair share of drama. As I being the angry patient that I am told the nurse that I would only receive my contrast fluid for the CT through my port, they could not touch my arm or hand veins. So finally after a brief stand-off they accessed my port and proceeded with the CT scan.
Note: chemo kills your veins and you also get tired of having people dig in your arms and hands only to realize after 5/6 band aides that they should have used your port to begin with.
After the chemo I was able to eat (the fast was broken) and eat I did. I felt almost like I was at a training table:

Well that is it in a nutshell for today, got my chemo (rat poison) next week so we will see what the doctors have to say.

The Holiday, Holiday's have been great, I can't complain. I wish my girls were with me but next Christmas we will all be together (with or without new lungs). I have benefited by the kindness and generosity of strangers (I use stranger loosely because that is what we were in each case until we exchanged names and greetings). I have enjoyed wonderful meals in the homes of my friends out here in California. Although I was not physically in Texas as the presents were opened I was able to participate via web cam so I saw all and those thoughts will keep my mind occupied as I get my cancer treatments this week and next.
Posted by Jerrold at Tuesday, December 26, 2006 No comments:

The dot is not enough. By dot or check mark I am referring to the drivers licence indication so many of us have on our drivers licence. The reason the drivers licence is not enough to let emergency room doctors know that you are an organ donors is that in the event you are involved in an accident your licence will not arrive at the hospital with you. After an accident you are transported to the hospital and your vital information often is being used by police or other emergency officials that arrive on the scene to work the accident. If you wish to donate organs, tissue, bone marrow.... you should register yourself online at
http://www.donatelife.net/
using this website the emergency room doctors have instant access to the organ donor registry. With organ donation time is very critical so having information at their fingertips really helps the doctors to know what they need to do with the patient in front of them.


Another note about the organ donation website is that you have control over your status meaning you can put yourself on or take yourself off as you wish; you can also pick and choose what you would like to donate.


A misconception that people have and I would like to dis-spell is that if you are registered to donate organs the doctors will I repeat will do everything possible according to your wishes (as stated in your medical power of attorney form or advanced health care directive) to keep you alive. The doctors won't let you die to simply harvest your organs they are bound by the Hippocratic Oath to do no harm.
Hippocratic Oath
Posted by Jerrold at Tuesday, December 19, 2006 2 comments:

Got My Game Face On

Hanging out at the Cancer center I just finished my lab work. Now comes the doctors visit then the chemo after that. I hope my musical selection for today keeps me distant as the chemo room is really depressing. 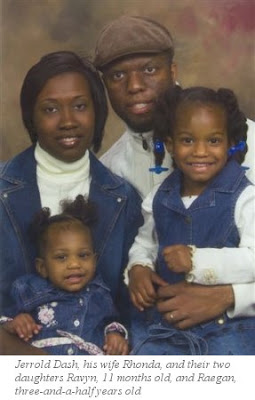 Jerrold Dash, a 33-year-old staff systems engineer at Lockheed Martin Aeronautics Company’s Fort Worth, Texas, facility, never smoked a day in his life. Although he did buy a cigar in 1997 when he graduated from college,it was only ceremoniously lit and never inhaled. So in February 2006, doctors had no explanation for their diagnosis of his stage four lung cancer—bronchoalveolar carcinoma. All they knew for certain was that he had been repeatedly misdiagnosed with bronchitis, asthma and pneumonia for the last five years, and his chances of surviving another five years were slim.

“I never smoked,” said Dash, “and I have always taken good care of my health. I attended college on a football scholarship and have always been an athlete, so I never imagined that I would be battling lung cancer and praying for a bi-lateral lung transplant—but that is my life now.” Although the cause of his cancer is unconfirmed, Dash believes it most-likely resulted from the secondhand smoke he was exposed to during his childhood. Dash’s assumption is supported by studies on secondhand smoke. According to the American Cancer Society, “Studies have shown that secondhand smoke causes thousands of deaths each year from lung cancer and heart disease in healthy nonsmokers.”

Although Dash has never picked up a cigarette, he is now faced with a difficult set of circumstances a nonsmoker would never expect—he is living alone in Mountain View, California, away from his wife and two daughters, where he is receiving cancer treatment and awaiting a double-lung transplant. Stanford is one of a very few number of medical facilities in North America willing to perform lungs transplants on patients with lung cancer.

During the months of his miserable treatment, Dash has had a lot of time to think about his pending lung transplant. As Dash explained, “I have come to the realization that new lungs, barring any medical complications, can heal my body, but my mind will still need some work. I am not crazy or deranged; I am just mad as hell.”

“Having never smoked, I am mad as I fight to breathe and see smokers lighting up not caring where or in what direction their secondhand smoke goes. In California there is no smoking in restaurants or businesses, however that does not stop the smokers from lighting up right outside of entrances to such establishments. It physically hurts me to have to walk through this stuff, especially when I am walking through someone else’s smoke to get into the hospital for my cancer treatment.”

There are many reasons Dash supports Lockheed Martin’s new tobacco-free policy, and he is thankful that the company is getting the word out to employees about the dangers of smoking and secondhand smoke. He wants people to hear his story, and to know from his experience how tough it is to fight cancer.

“Cancer stinks!” exclaimed Dash. “No one deserves it, but you can’t let it beat you—although the medicine will try. You have to fight for every breath because it is so precious. The doctors tell me I have cancer and looking at the x-rays and seeing the huge chemo port-a-cath that bulges from beneath the skin of my chest, I think they are half right with their diagnoses. I have cancer; but cancer doesn’t have me.”

This new chemo (the third different chemo drug / drug combination I have been on since March 2006) really wipes me out I feel sluggish all the time and always crave a nap. The funny thing is that even after taking a nap I am still tired. This chemo also makes me really hungry kind of like when I was playing football hungry for example (the other day I was at the hospital for some routine test and I decided to eat in cafeteria so on my first plate I got 3 large veggi egg rolls a cup of fruit a cup of cottage cheese and a large milk. I ate that in record time but I still was hungry so I went back and had the guy on the grill fix me a double cheese burger, fries, and drank a coke and I was still hungry. I did stop with that for a while.) I am able to maintain my weight with this new chemo and I am almost back to my intimidating self (weight 219), my workouts are tougher now as I have to force myself through them (not having much energy) but I have to exercise to live.

I missed my graduation which was held on Saturday December 9, 2006 on the campus of SMU
Visit SMU!

I am one class and one paper short of graduation a milestone / goal I want to reach.